Posted on November 25, 2016 by jeandrawingaday

For last few weeks I’ve been building up to taking part in Scott Wong’s now annual event “flood the streets with art”. This event is on the day after Thinksgiving takes place in America. He invented it as an alternative to Black Friday. FtSwA is all about artists making art and leaving it somewhere as a random act of kindness for someone else to pick up and enjoy.

In the last few weeks the artists taking part have been posting about what they would be leaving – so many different ideas and techniques. Here in Northampton four of us took part: Minnie Teckman, Kath Pound, Jo Almond and me. Altogether we had about 20 pieces of art to drop. 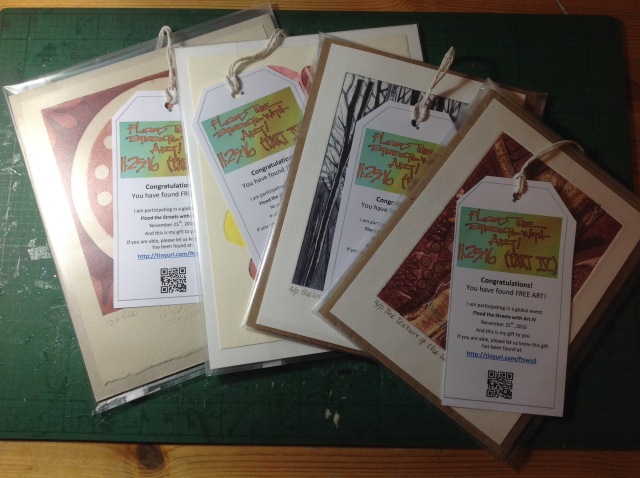 We were careful to wrap them all up as the weather has been so wet this week. Each one also has a label so the finder can post that it’s been found or contact the maker. When the day came Jo dropped her painting by the university in the morning. 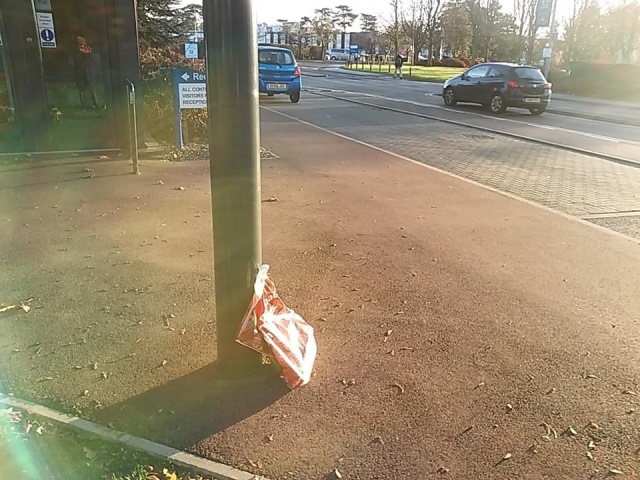 Mid morning Minnie and I met in Abington Park to drop some more pictures. It was a beautifully sunny day but very windy which caused some challenges in leaving the art around. We left art around the park, the bus stop and part of the Wellingborough Road.

As we finished we heard that the one placed in the toy car had been found and as I walked home I saw a lady walking her dog find the one on the bench.  She was a bit puzzled and had a chat with a man passing by about it before taking it.

Later in the morning I took the remaining pictures into the town centre. Leaving these seemed harder as there were so many people about! I left them near NN Contemporary, the NNCafe, the Errol Flynn cinema, Colemans, St Giles Churchyard and under then hand of the John Clare statue.

Scott warned us that we might not hear who received the art so we were lucky that during the day we began to hear that some of the art had been found.

Kath had a phone call from someone who found her drawing of a horse. I heard through twitter that three of mine had been found. Then a finder of one of Kath’s posted on the FtSwA page. On Saturday I had another check in from Twitter. 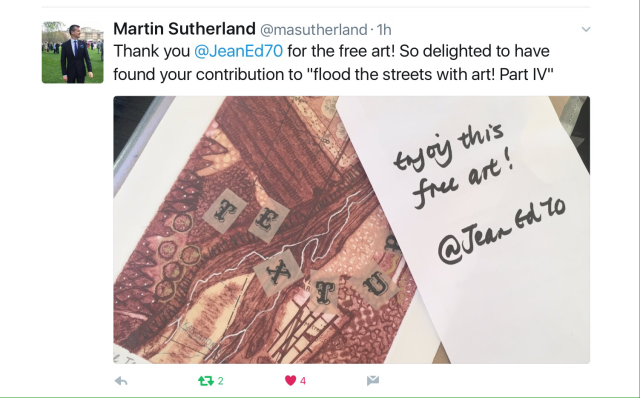 The art has only been out there for a few hours so it was good to hear that some of it had found appreciative owners. Even better, we can see so many posts about art left and art found in places all round the world, brought together by art. What could be a better answer to Black Friday?

There’s a Zeemap where you can see where art was left and found! Here’s Northampton and if you look at the link you can zoom out and see pins elsewhere in the world.

This is an annual event so if you want to take part next year look out for detail here on Scott’s page: Flood the Streets with Art

I am a printmaker and artist, a teacher and author, a senior lecturer in the School of Education at The University of Northampton.
View all posts by jeandrawingaday →
This entry was posted in Uncategorized. Bookmark the permalink.

2 Responses to Flood the streets with art Part IV

A blog by Jo Dungey

AN ARTIST IN BASILICATA, ITALY

working and playing with people and places...

Sharing daily drawings from my sketchbooks

C is for Cleo

Reflections on our experiences of my young daughter's brain cancer

A blog of art, books and life lessons

Artwork, data analysis, and other projects by Jon

Impression That I Get
Art-Chap-Enjoin

The Pencil of KELS

Pencil Tales & Pencil Drawings, a life described by many lines. My Pencil Tales are truncated into Pencil Stubs - my way of safeguarding my intellectual property (KELStephen2016©).